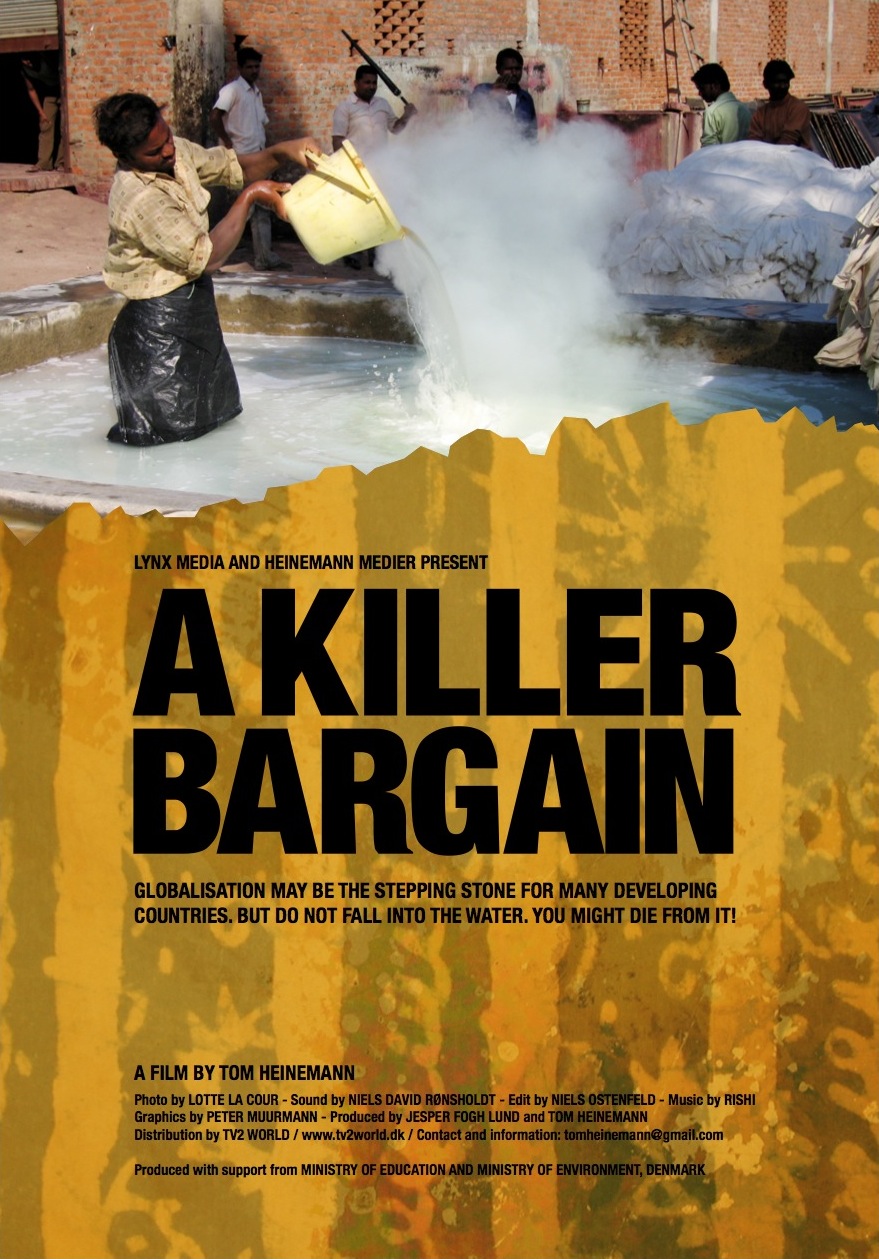 Pesticides.
Yet cotton only covers 4-6 % of the fields in India, the consumption of pesticides on cotton is more than 50 % of all used pesticides in India.The illiterate farmers are spraying extensively – up to 30 times a year (4-5 times more that recommended) – without any use of protection equipment or safety measures.
Numerous of the pesticides used in India are by far banned in the Western world. Many of the international manufactores of pesticides is aware of the fact, that the Indian market is luctrative, and without the same restrictions as in their homelandsAs one, the Danish multinational pesticide company, Cheminova has their own factory in the town of Panoli in Gujarat.
Out of eleven known product manufactored at the Cheminova plant, seven of them are totally banned or not released in the EU.
Neighbouring villagers complain about what they see as an illegal pollution from Cheminova, and they also claim that their serious rash on their bodies comes from the gasses released by the many chemical factories in the area.

Cancer.
Many of the poor and illetarate farmers ends their lives at a charity hospital in the town of Bikaner or at special hospices for the poor. Doctors are currently investigating thousands of data from living and dead farmers, trying to establish knowlegde on the possible links between the extensive use of pesticides and the explosion af cancer in the so-called Cotton Belts of Inida.The uncontrolled and eccesive use of pesticides does not only affect the farmers health and safety. Where ever the authorities or ngo´s are testing they´ll find residues of pesticides. In milk, flour and bottled drinking water, high amounts of pesticides has been found thorughout the country. Even in Coca Cola and Pepsi, the scientist have found residues of some of the most hazardous chemicals.

Cotton in Sanganer.
The cotton ends in the acid baths in a number of primitive factories outside the famous tourist hub, Jaipur in the state of Rajesthan. But the buyers from the large European outlets and chains does not controle how the cotton is being bleached and dyed before it ends as beautiful hand printed tablecovers, bed linnen and cushion covers.
Officially the exporters claim, that there mainly is being used vegetable dyes, and that everything is being done in a well organized and environmental friendly way.
But reality in the town of Sanganer is completely different. Dalit (formerly known as the untouchables) workers standing barelegged in acid- and chlorine baths day in and day out, bleaching and dyeing the cotton on it´s long journey towards the European markets. In the town of Sanganer some 1.000 primitive factories are established.
Dyestuff, chemicals and and chlorine are released directly and untreted into the irrigation canals in Sanganer. The area is caractirized by it´s 100 % biological dead fauna, and the smell of chlorine and chemicals in the area is intense.To make solid proof the chain of production, the filmcrew baught a bautifull hand printed bed linnen at the “Indiska”-shop in Copenhagen, Denmark.

The Film
The documentary follows the bed linnen back to the exact factory where it was produced under extremely hazardous conditions. Far awy from where it was supposed to be made, and far, far away from the Code of Conduct and environmental and ethical standards that the Swedish “Indiska”-chain of some 70 shops throughout Scandinavia has guarantied their customers.

Cotton in Panipat.
In the industrial town of Panipat – some 100 km north of New Delhi – large Swedish, Danish and European supermarkets are supplying the European customers with cheap home furnishing textiles as sofa covers, towels and bathroom rugs. The workers are underpaid, migrant dalit´s from some of India poorest states like West Bengal and Bihar. At the factories there are no unions, the daily work can be as many as 24 hours a day – seven days a week. The workers are mostly un-protected and chemicals are stored illegally. One of the factories appearing in the documentary does not even have an official permit from the Indian authorities to run. At the factory some 40-50-child workers are working on a regular basis.
Workers also claims that they are being beaten at the factory Companies like JYSK (DK), Dansk Supermarket Group (DK) and ICA (S) are among the customers. The sales manager of the factory also claims that European companies like Ahold (NL), Morison’s (GB) and Superquinn (IR) are among the regular buyers visiting the factory.On their websites the consumers can read, that many of the above mentioned companies has a high ethical profile, where the consumers are assured that all textiles/materials manufactured for the companies are done in an ethical, environmental and social right way. Disguised like potential buyers from a fictive chain of shops, the film crew reveals some of the harsh conditions at the factories and documents how the production in fact is being done.

This statement is both challenging and provocative.
When a traditional European company has more than 50 employees, you can be almost certain that the CEO´s are planning to outsource their production to a poor country in the third world – far away from the high salaries and expensive raw materials.

That’s globalisation – and that’s good. But can we trust the Western companies, when they promise the consumers that they have a high ethical, social, environmental and moral standard?What we saw and filmed during our 7.000 km long journey in India in the fall and winter of 2005 was like a nightmare. Farmers spraying their cotton fields with four to five times more than the recommended amount – completely unprotected and not even able to read the warning-sign on the pesticide containers from the multinational companies.

In the heavy fumes of the poisonous sprays, we found that many of the products manufactured and sold to the illiterate farmers have been banned in our part of the world for many years. We are quite aware of how dangerous the chemicals are but apparently we don’t give a damn about how the millions of Indian farmers are handling the toxic gasses – similar to the weapons of mass destruction that the UN-inspectors were so eagerly trying to find in Iraq.And what about the textile workers standing in acid baths up to their waists – supplying Western designer shops, discount outlets and supermarkets with the “beautiful textiles of India”– while their bodies are melting away in the toxic fumes of chlorine, acid and chemical dyes.

But the Dalit workers (formerly known as the untouchables) do not have an alternative. They migrate from some of the poorest states in India in the chase of survival on a dollar a day.Wherever we turned the camera, untreated chemical wastewater was being released directly into the rivers and canals. 100 metres further downstream, local farmers use the same water for irrigating rice, wheat and vegetables.Globalisation may be the stepping stone for many developing countries, but do not fall into the water.